So there he was one day, sitting in the woods with his back to a tree, the .22 in one hand and a sandwich in the other, waiting for something to scamper by. Something did. Into the periphery of his vision, here came a chipmunk, quiver-creep in the clearing. On impulse, Stevenson tossed him some bread from the sandwich. He came closer, Stevenson says. More bread. Closer. And right there, in the still afternoon away from everybody, Stevenson had a life-changing epiphany. I thought: Here's this little critter trying to make friends. I figured, maybe it would be fun to draw or sculpt these little animals instead of shooting them. It changed my whole way of thinking.

Making art of animal likenesses has been his thing ever since. But he does it in three dimensions instead of two. His father, a Dental Technician, showed the way. He sculpted teeth, Stevenson explains. I used to go to his studio and play with the plaster and carve with the waxes. I wasn't good in math and English, but when it came to doing something with my hands, I was pretty good at that.

Now he sculpts wildlife out of porcelain and replicates the results in wood resin. His converted garage in a marshland-ringed Virginia Beach suburb is a kaleidoscopic profusion of colorful creatures from bluebirds to white buffalo. There are pert owls, roused rabbits, drifting ducks, eagles, otters, bears, and yes, there are chipmunks. "When I do a display", Stevenson says of the galvanic gallery, "I have shock value".

His technique: Start with a chunk of porcelain and remove everything that doesn't look real. There are figures frozen in time that range in stature from bug-eyed turtle babies emerging from eggs to full-sized, wingspread bald eagles. They are priced from ten dollars for small replicas to thousands of dollars for original one-of-a-kind works.

I have 3,800 people who have followed me over the years and collect my work, notes the artist.

Stevenson arrived in Virginia Beach with a Bachelor's of Science in Education from Henderson State University in 1975. He had intended to teach but instead managed a fitness center at Hilltop. "I wanted to pursue the 'Artist' idea," he says. "I had every other day off to practice my skills at a pottery studio near the oceanfront. I knew I had to stay in shape because what I did was pretty hard, the sculpting and the shows." The shows, like the Boardwalk Art and the Neptune Festival, are what drew him here. His east coast shows now up to 18 a year, ranging from as far north as New York north and Charleston, S.C., south - has provided his full-time living from 1978 forward.

Folks see me sitting there at the shows taking money, Stevenson says, and they figure that can't be too hard. Guess again. The Artist loads his Econoline van - Virginia license "SCULPT-M? with crates of painstakingly boxed, bubble-wrapped works, and drives for up to 10 hours. At the destination, he spends at least eight more hours setting up his display. When the show is done, it's five more hours to break it down, and then a long drive back the same night. And then there's the accounting.

And shipping..."There's a lot of lifting, a lot of endurance involved," Stevenson says.

The patrons at the shows tip him off to what's of interest.? Have you done a downy? they'll ask, referring to the woodpecker. "Do you do a wren?"? Stevenson hears that three or four times, and he sure does.

It's the business built on the befriending of a chipmunk.

*** This article is an edited excerpt from Port Folio Weekly.

​He was a high school sophomore with a .22 rifle and plenty of outdoors to move around in, doing what a Texas kid mostly did:  Hunt.

What else? Gary Stevenson was a Lubbock dental technician's son with an affinity for the alfresco. He loved getting out of the house and the classroom and into the forest primeval with a bag lunch and a gun. It felt magical to me, Stevenson recalls. I'd go out by myself and get in touch and feel good inside. I enjoyed the feeling of being that close to nature. 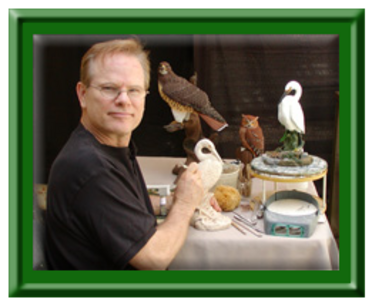